The Opengela model of urban regeneration is expanding not only in the rest of the Basque Country, but also in different European countries. In April, representatives from seven municipalities and regions visited Bilbao and Eibar to see first-hand the pilot projects being developed in the Otxarkoaga and Txonta neighbourhoods, respectively.

From Croatia, officials have come from two regions: on the one hand, from the county of Medjimurje, which covers three cities and 22 municipalities. There, the regional energy agency MENEA operates as an advisory centre for energy and climate issues and is now in the process of expanding its services to, among other things, integrate a home renovation service collaboratively and ensure financial sustainability.

The other Croatian region present in Euskadi covers the counties of Varazdin, Koprivnica-Krizevci and Virovitica-Podravina. There, the regional energy agency, REA North, has already started to provide consultation and technical guidance related to housing renovation. However, it is looking for ideas to address the financial side and questions on how to establish an innovative citizen-driven one-stop-shop model at the local and regional levels.

There was also a Spanish presence, through representatives from Extremadura and Asturias. Representatives from Extremadura came with AGENEX, an energy agency that has already participated in other European projects such as INNOVATE or HousEEnvest. It is looking for ideas and experiences to address social housing from a perspective in which homeowners are involved, in addition to the search for sustainable financial tools. For its part, Asturias was present through Viviendas del Principado de Asturias-VIPASA, the company that manages the public housing stock of the Principality of Asturias.

The fifth region comes from Ireland. There, the energy agency 3cea is active in the counties of Carlow, Kilkenny, and Wexford and is committed to energy efficiency and renewables. Finally, there were also the presence of the Polish region of Mazovia through the Mazovia Energy Agency, and from Greece via the Thessaloniki social rental agency.

In Otxarkoaga, in Bilbao, work is being carried out on five buildings totalling 16 portals with a total of 240 dwellings. The office is located in the former BBK kindergarten. In the Txonta neighbourhood in Eibar, the pilot project involves work on 221 homes with 17 homeowners. 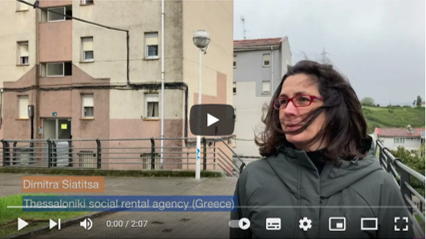